Tech&Society: “Fake News, Filter Bubbles, and the Fight for the Truth”

Aspen Institute España and Fundación Telefónica hosted the fifth conference of the new Tech & Society Program on June 19. In this session, which took place after the Socrates Seminar, we examined the effects of the internet in the diffusion of false news and in the creation of information bubbles, as well as its in impact on the integrity of our democracies. Eli Pariser, author of “The Filter Bubble: How the Personalized Web is Changing What We Read and How We Think ” and cofounder of Upworthy, was the keynote speaker for the session.

In December of 2009, Google began to personalize the results of its users´internet searches and thus ushered in a new era where in which, as if by magic, websites began to adapt and customize their content based on the individual viewer´s tastes. The race to collect as much personal data about us as possible- from our political leanings to the hiking boots we just browsed on Zappos- and to tailor our online experience accordingly, is now the defining battle for today’s internet giants like Google, Facebook, Apple and Microsoft.

As a result, we will increasingly each live in our own, unique information universe— what Pariser calls “the filter bubble.” We will receive mainly news that is pleasant, familiar and confirms our beliefs—and since these filters are invisible, we won’t know what is being hidden from us. Our past interests will determine what we are exposed to in the future,  leaving less room for the unexpected encounters that spark creativity, innovation and the democratic exchange of ideas.

Such personalization could undermine the internet’s original purpose as an open platform for the spread of ideas, and leave us all in an isolated, echoing world. But it is not too late to change course. Pariser lays out a new vision for the web, one that embraces the benefits of technology without turning a blind eye to its negative consequences, and will ensure that the Internet lives up to its transformative promise.

The conference is a part of the new Tech and Society Program, a joint initiative between Aspen Institute España and Fundación Telefónica. The program aims to establish a forum for reflection on the big questions posed by advances in digital technology, and its widespread impact on multiple sectors of society, including human relations, politics, education, economics, and medicine.

Digital technology is radically changing almost all that we do, from the way in which we conduct business to how we educate the next generation, to the ways in which we remember to coexist in a democratic society. What are the most important technological changes and tendencies and in what we can we prepare to face them? What specific forms of technological change are improving our both individual and collective lives? What is technology´s impact in terms of political participation? How does technological development affect the work force, productivity, and the perception of health and of life? 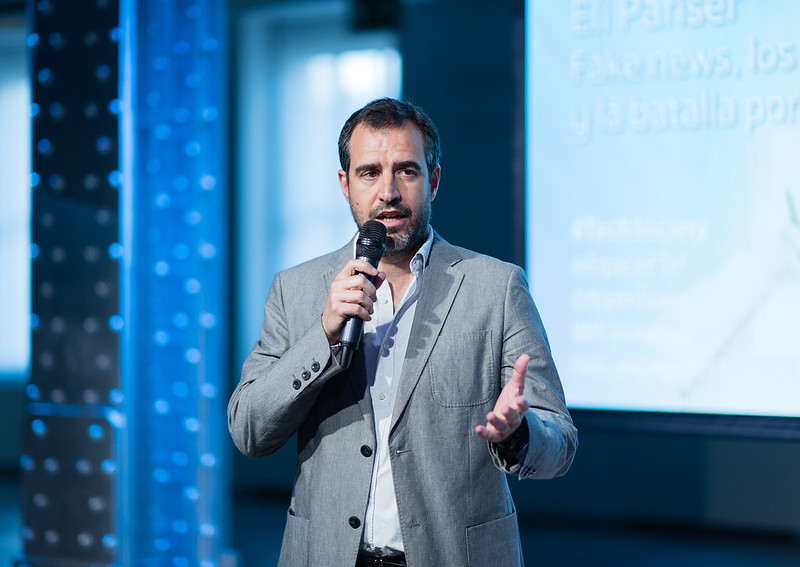 Eli Pariser joined MoveOn.org in 2001, serving as its executive director from 2004 to 2009. During this period, MoveOn revolutionized grassroots political organizing by introducing a finance model based on small donations solicited via email, which has since been widely used across the political sector. MoveOn.org rapidly grew to have more than 5 million members who collectively donated more than 120 million dollars to campaigns concerning issues such as climate change and campaign finance reform. In this same period, Pariser cofounded Avaaz.org, the largest online civic organization in the world, with more than 40 million members.

This website uses cookies to improve your experience while you navigate through the website. Out of these cookies, the cookies that are categorized as necessary are stored on your browser as they are essential for the working of basic functionalities of the website. We also use third-party cookies that help us analyze and understand how you use this website. These cookies will be stored in your browser only with your consent. You also have the option to opt-out of these cookies. But opting out of some of these cookies may have an effect on your browsing experience.
Necessary Always Enabled
Necessary cookies are absolutely essential for the website to function properly. This category only includes cookies that ensures basic functionalities and security features of the website. These cookies do not store any personal information.
Non-necessary
Any cookies that may not be particularly necessary for the website to function and is used specifically to collect user personal data via analytics, ads, other embedded contents are termed as non-necessary cookies. It is mandatory to procure user consent prior to running these cookies on your website.
SAVE & ACCEPT